And to everyone who leaves this place with those otherworldly, flawless pictures on top of bottle caps, and being held in the palm of their friends’ hands… how. Just how.

The warnings about the 3-day “tour” from San Pedro de Atacama, Chile, to Uyuni, Bolivia, via the infamous Salar de Uyuni salt flats are numerous.

Apparently – according to most people – to get it just right you had to make sure you were acclimatised well, or else you’ll be incapacitated by the headaches and nausea. You must also have plenty of warm clothes, and a good sleeping bag for the freezing cold hostels. And you shouldn’t  eat any of the food they serve you on the 3-day all-food-included-tour with absolutely nowhere else to order a meal, because it all makes you vomit and suffer chronic diarrhoea. And you’ll be sleeping in a tin shack, probably on the floor. And your driver is probably going to have a bottle of whiskey in the glovebox so he can get wildly drunk and drive you into a lake.

Luckily, most people happen to be quite wrong.

Well all apart from one – it was quite cold one night.

Perhaps we’d read all the wrong blogs or message blogs, from people who think glamping is proper roughing it, or those who have just have never been to Invercargill in the middle of winter, but the Salar de Uyuni tour was neither tough, nor rough. And the food was great.

*Also read: South America on the cheap: money tips and advice
*Eating around the continent: the best food of South America

How to book a tour

As we’ve previously mentioned with booking things in South America, this is basically a case of wandering between a few tour operators and seeing which one gives you the best deal. Here, more than anywhere else we’d been, is particularly true to the ‘Get the cheapest price’ mantra, and throw caution to the wind. Most tour operators, though they operate separately, will then chuck you in with a bunch of other random people (many of whom have paid significantly more than you) to fill up a Jeep. So, at the end of the day – no matter what you’re paying, you’re all getting the same service. Despite what they might tell you, paying more isn’t going to get you ‘luxury’ lodgings or ‘gourmet’ meals. There are only so many hotels built on the salt flats.

We were in San Pedro at the time, so we just wandered around a few operators there. However, it is important to note that it’s more expensive to do the tour from Chile to Bolivia, rather than vice versa. In Bolivia, you can book the tour in Uyuni or La Paz.

It all begun for us at 7am in San Pedro de Atacama; regardless of where you’re staying – Chile or Bolivia – expect an early start. We were then shunted onto a full bus of travelers, bound for the border with Bolivia.

First stop is border control; essentially a tiny little shack in a barren desert, nothing else around for miles, barely big enough to house a couple of toilets. Nonetheless, your passports should be stamped quickly without barely a question asked (unless you’re smuggling you shouldn’t be. And admit to it).

Following the formalities, and doing the odd jumping jack to keep warm (the temperature hovers around 0 degrees at the crack of dawn, and barely makes it to the low teens during the day), our bus load was split up and directed to about a dozen idling Land Cruisers.

Because New Zealand just so happens to be the most overrepresented country outside its own shores, we happened to find ourselves in good company, with two other Kiwi lads, and an Italian couple.

After zooming off into the vast desert that plain doesn’t have roads, your first stop will be the white lagoon. You’ll jump out for a look and some photos, but will inevitably run back to the SUV for warmth. It is, utterly stunning.

Over the first two days, you’ll actually see a hell of a lot of other crystalline lagoons, that look utterly out of place against the arid landscape, making it look like you could be on the moon. Not that they got less impressive, but I did lose count of them all. And ran out of describing words.

An insurmountable highlight the first day will be visiting the thermal hot springs, among the highest in the world, and almost an out-of-body experience laying your head back and taking in the vast landscape below. It’s said to be quite spectacular at night too, and some tour companies do offer nighttime excursions.

Over the following days, you’ll zoom across a bunch of different sights on the plains, mostly lagoons – flamingo-strewn or barren – and excellent tree and rock formations.

However, the morning of the third day is what it’s all been leading up to. You’ll rise early, not just pre-coffee early, but before even the earliest of early birds are even thinking of rising. At about 5am you’ll pile into the Land Cruiser and set off across the desert for the pis de resistance.

You’ll arrive at a rocky outcrop in the Salar, an ‘island’ if you will, just as the sky is beginning to change colour and watch it clamber up from below the horizon as llamas meander around beside you.

And there’s just white in every direction, everywhere you look. It’s hard to comprehend something so pristine, so large, and so made of salt.

Once the sun is well and truly up, that’s when your Western tourist-wizened guide will take you off into the middle of the salt flats and park up – ready for you to make complete fools of yourselves. And foolish we were.

Those “clever” perspective-altered photos everyone manages to master the art of in a few minutes, of people being dwarfed by plastic figurine dinosaurs, and running on tiny coca-cola bottles, and holding their friends in between their fingers? Yeah, they’re impossible. I’m calling it: they’re all Photoshopped.

Because for the life of us, after a solid hour of attempts, we were no closer to look as though we were dancing on that plastic figurine tiger, than it was about to come alive and teach us how to do it. Oh, if plastic figurines could talk…

Around 450 failed attempts later, and a camera roll that made us more ashamed than a camera roll ever should, we had one photo we could document the trip with. A singular jump photo, in which one of us still wildly out of sync. 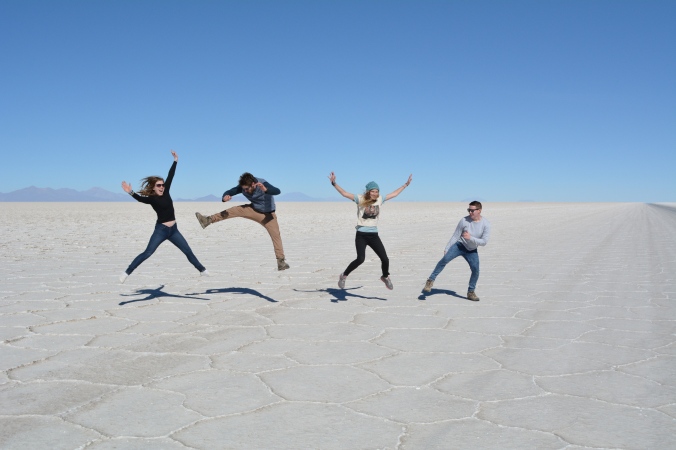 The ones feat. our plastic figurine dinosaur just looks like my friend’s kid accidentally left his toy in front of my lens and we’re awkwardly having a bad dance party really far away from the camera.

Once you’ve exhausted just how much failure you can feel in one day, you’ll stop by the train graveyard in Uyuni, your end stop. We’re kind of conflicted about this place. I mean, no one needed to see Thomas like that.

Our hostel for the first night may not have been five-star, but it was nothing to get upset about. In fact, it was probably nothing worse than a scarfie’s flat on Castle St in winter. And not even the middle of winter – just when it’s creeping into the negatives and everyone’s too stingy to turn the heat pump on.

But then again, you do have a Disney princess duvet cover to keep you warm so it’s not all bad.

For the second night, we stayed in a hostel made of salt. If that doesn’t get your wheels spinning than I don’t know what will. (Yes, we did each lick the walls. Had to.)

How anyone disliked – or got food poisoning – from the three course feast delivered to us morning, lunch and night was anyone’s guess. My personal favourite was roast chicken, potatoes, fried bananas and a bottle of wine to round out our second night. Better yet, each day when we arrived at our accommodation, there was always a gigantic bowl of biscuits and tea waiting for us. And they were animal biscuits. I really love me some animal biscuits.

Let’s revisit this for a minute.

*Headaches and nausea due to the altitude?

While walking 30 metres did feel like running up the side of Rapaki in a fat suit, it wasn’t any worse than the rest of Bolivia. Besides, it was just another reminder to stay off the alfajores.

*You must also have plenty of warm clothes, and a good sleeping bag for the freezing cold hostels.

It was cold, but a jacket and some reasonably thick tights will do you right. Our first hostel provided us with duvets and sheets, but our second didn’t – so it’s worth erring on the side of caution and bringing a sleeping bag just in case. Plus, you’ll probably need the duvet and sleeping bag.

*Don’t  eat any of the food they serve you because vomit and chronic diarrhoea.

Bull-f*cking-shit. If anything, I put on a noticeable amount of weight because of all the lush food. Hold me back from them animal biscuits.

*You’ll be sleeping in a tin shack, probably on the floor.

Do tin shacks provide you with Disney princess duvets?

*Your driver will be a drunkard.

Jilmar was probably the no more likely to drive us to a fiery, vodka-induced crash than anyone else in the car. He was a complete sweetheart, and we made sure to buy him some treats and give him a good tip at the end. as should you.

I actually now detest people who have those classic, and so original, Godzilla-inspired shots where all their friends totally believe a giant dinosaur is chasing them in the middle of an enormous desert.

Seriously. I still don’t know how they do it. But I would advise seeking out a photography course before you’re sat in the middle of the Salar wondering if your whole life has been a lie.

Ilha Grande: How not to get there, and other useless tips

Brazil: best of the rest

View all posts by ashstew →

2 Comments on “Salar de Uyuni: Whoever said too much salt was bad for you?”